Thanks to Pat Richardson for posting this video clip on YouTube.
Posted by Livemalls at 9:56:00 PM 5 comments: Links to this post

Email ThisBlogThis!Share to TwitterShare to FacebookShare to Pinterest
Labels: Belk Previously on LiveMalls
Macy's (former Hecht's), Crabtree Valley Mall
Posted by Livemalls at 6:52:00 PM No comments: Links to this post Previously on LiveMalls
Macy's (former Hecht's), West Wendover Avenue
Posted by Livemalls at 2:32:00 AM 11 comments: Links to this post Previously on LiveMalls
JCPenney Outlet Store, Liberty Fair Mall
Posted by Livemalls at 2:21:00 AM 5 comments: Links to this post Previously on LiveMalls
Sears, Crabtree Valley Mall
Posted by Livemalls at 2:08:00 AM 7 comments: Links to this post Previously on LiveMalls
Hudson Belk, Cary Towne Center
Posted by Livemalls at 1:45:00 AM 2 comments: Links to this post Previously on LiveMalls
Belk (former Leggett), Liberty Fair Mall
Posted by Livemalls at 1:13:00 AM No comments: Links to this post 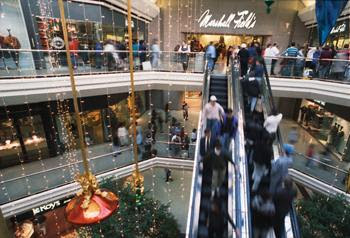 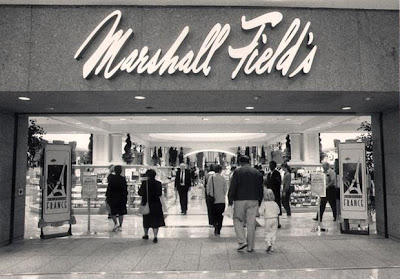 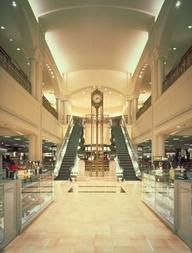 Marshall Field & Company made their second debut in Central Ohio in August 1989 as one of the anchors of Columbus City Center, a large urban renewal project in Columbus highlighted by a 1.3 million square foot enclosed mall connected to the existing flagship Lazarus store. The three-level Field's covered approximately 200,000 square feet and featured a two-story atrium with a prominent clock tower.

The location of the new store, at 3rd & Rich Streets, was very near the site where the former flagship store of The Union stood. The Union was a Columbus-based department store chain that was purchased by Marshall Field in 1980. It was located at the intersection of Town & High Streets, across from Lazarus. Field's itself changed owners shortly after the transaction, and The Union was briefly merged with Field's Cleveland-based division Halle's before closing for good by 1983.

Shortly after the City Center location opened, Marshall Field's was sold again, to Dayton-Hudson Corporation (now Target Corporation). Dayton-Hudson added a second Field's location at the nearby Tuttle Crossing mall in 1996, and operated both stores until 2003, when they were sold to May Department Stores and renamed Kaufmann's, as part of the Pittsburgh-based chain's foray into the Columbus market.

In 2005, Federated Department Stores (parent of the Columbus-based Lazarus and Macy's chains) purchased May Department Stores and eventually divested the Kaufmann's store at Polaris Fashion Place (opened in 2001, prior to the Field's transaction). The City Center and Tuttle Crossing stores were converted to Macy's, and ironically the new Macy's was on the opposite end of the mall from a recently closed Macy's location that was formerly Lazarus.

In September 2007, citing a sales slide due to failing fortunes at City Center, Macy's announced that it was closing its City Center location, with a final closing date just before the holiday season.

Special thanks to Friend of LiveMalls Aryan666 for additional historical information.
Posted by Livemalls at 9:56:00 PM 4 comments: Links to this post Chicago Place is a mixed-use high-rise at 700 N. Michigan Avenue (between Huron and Superior Streets) in Chicago, Illinois along the Magnificent Mile. The base is an enclosed eight-story shopping mall anchored by Saks Fifth Avenue featuring 45 shops and restaurants; above that is a 49 story tower containing condominiums.

The mall is one of several vertical malls along the Magnificent Mile, which include Water Tower Place, North Bridge and 900 North Michigan.

Though initially successful, Chicago Place has struggled for years, losing large tenants including Room & Board and Ann Taylor and failing earlier this year to lease space to Best Buy.

As a whole, the mall lacks a clear retail identity outside of being the home of Saks, and suffers from its oddly configured vertical layout and dated late-1980s design elements. Still, the mall has its appeal, with a number of smaller shops that specialize in European imports.

Though not for long. Change is afoot at Chicago Place.

To combat the lack of success, the mall’s owners are spending $20 million to $25 million over the next two years to eliminate the eight-story mall's center atrium and fill in the floors. The planned makeover to the mall could eliminate as much as half of the roughly 160,000 square feet of specialty-store space.

Instead of a revolving door leading into a mall, the building's Mag Mile facade will have doors into three separate retailers. Zara, the cheap chic retailer from Spain, plans to open its first Chicago store in part of the street-level space facing Michigan Avenue. Saks Fifth Avenue will remain as anchor on the north corner and could possibly expand.

Another unnamed retailer will take 15,000 to 18,000 square feet in the middle, with a floorplate stretching to the back of the building and into the basement formerly occupied by Bockwinkel's grocery store.

Additionally, the mall owners are in talks to turn 100,000 square feet to 150,000 square feet on the third through seventh floors into a hotel.
Posted by Livemalls at 10:44:00 PM 4 comments: Links to this post Email ThisBlogThis!Share to TwitterShare to FacebookShare to Pinterest
Labels: Belk